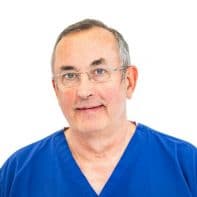 Steve qualified as a medical doctor in 1981 and by 1983 had started taking an interest in fertility treatment. In 1987 he moved to London to continue with his training and research.   He also was involved in establishing the Bridge Fertility Unit, which started IVF in 1987 at London Bridge Hospital.  Having completed his MD thesis in 1991, he moved to Yorkshire where he began to work for the Hull IVF Unit, as well as completing his training as an Obstetrician and Gynaecologist, and he also established links with the department of Biology at York University which resulted in further productive research.

In 1993, Steve moved to St James Hospital in Leeds where he finished his post-graduate training before taking up a Consultant post in Obstetrics and Gynaecology in Hull in July 1994.  He became Medical Director of the Hull IVF unit in 1996, and has remained in this position since. In November 2016, Steve retired from the NHS to concentrate on developments within the IVF unit.

The Hull Andrology Unit has relocated its services from Hull Royal Infirmary to a new purpose built facility on the Hesslewood Office Park from Friday 1st October 2021.